FirstNet, or the First Responder Network Authority, is a federal agency formed to ensure the building, deployment and operation of the first high-speed nationwide broadband network dedicated to public safety. The FirstNet Authority was created by Congress in 2012 as a result of recommendations made by members of the 9/11 commission. The enabling legislation mandated a public/private partnership that would allow FirstNet to eventually become self-sufficient. Following a 15-month national RFP process, AT&T was selected to build the Nationwide Public Safety Broadband Network. In exchange for the spectrum access and financial resources brought by FirstNet, AT&T has committed to spending $40 billion over the life of the 25-year contract to build, operate and maintain the network. AT&T may profit from leasing unused or underutilized portions of the dedicated spectrum to nonpublic safety subscribers. Public safety users are NOT required to use the FirstNet system, but may elect to subscribe and pay rates comparable to or below current cellular rate plans offered by companies nationwide. 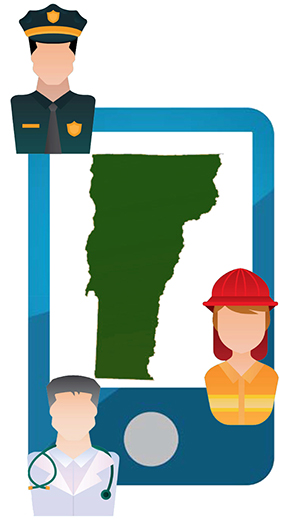 AT&T is starting an ambitious buildout with the support of designated funding from FirstNet. When Vermont decided to opt-in to the federally overseen network, AT&T committed to building more than 30 FirstNet sites in the state. More than half of those sites are new and must progress through the permitting process. While administrative progress has been made on these sites, as of July 2019, no new sites have come online. The 25-year contract between FirstNet and AT&T requires that AT&T complete the initial buildout by 2022. The contract also requires a minimum number of public safety subscribers be achieved per state. If AT&T does not meet the minimum subscriber numbers in the contract, the FirstNet Authority can levy financial penalties against the company.