The site is secure.
The https:// ensures that you are connecting to the official website and that any information you provide is encrypted and transmitted securely.

VCOMM, or the Vermont Communications System, is an interoperable radio system that operates on the VHF and UHF bandwidths and connects first responders located within a state coverage area to the Williston and Westminster dispatch centers. VCOMM is intended to provide interoperable radio coverage and service throughout Vermont and provide an alternate operability solution for first responders where their primary Land Mobile Radio (LMR) system is not working. The system initially debut in 2013, but there were difficulties associated with dispatcher engagement with the channel due to the infrequent requests for assistance. Consequently, as first responders tried out the system, they did not always receive a response and concluded that VCOMM did not work. The channels remained unused.

How It Works Today 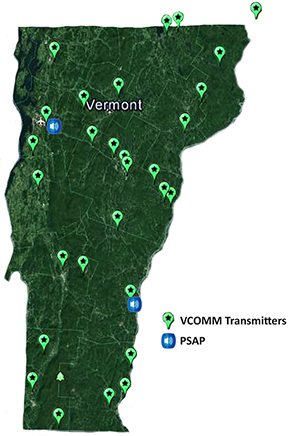 In 2018, Radio Technology Services began to transition the VCOMM system from a dispatch-centric system to an operator-centric system. Dispatch consoles at the DPS Williston and Westminster PSAPs are now fitted with a new visual cue that will activate when someone attempts to establish contact through the VCOMM channels. In order to activate an alert notice on the dispatcher’s terminal screen, the on-scene communication leader can go to either a VHF or UHF VCOMM calling channel and enter a numerical code (unique to each transmitter) using a DTMF or dual-tone multi-frequency microphone. When the code is entered, a VCOMM channel button will blink on the dispatch screen and alert the dispatcher. Upon receiving the alert, the dispatcher can open the channel and respond to the call. A first responder must only enter the DTMF code once to initiate a conversation with dispatch. Working through dispatch, communication leaders may use VCOMM to request mutual aid and communicate the common channel of communication for the emergency event. The role of dispatch is not to activate the VCOMM system, but rather to facilitate communication and respond to requests for aid. The VCOMM channels are reserved for interoperable communication and provides frequencies that can be used across service areas, regions and states. 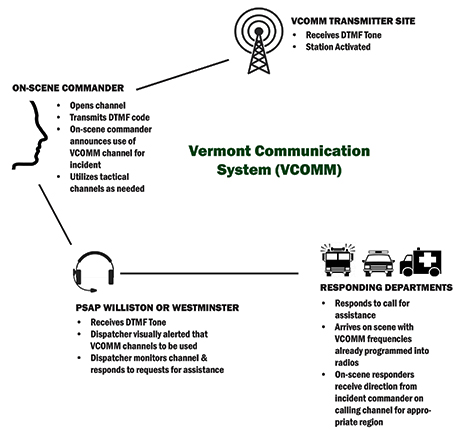 Interoperability in a Multi-Agency Response

The most common means of achieving interoperability is to program existing operational channels from neighboring agencies into your radio. This is the approach that has traditionally been used in Vermont with a degree of success. Programming adjacent agencies’ frequencies works well when agencies interact regularly. However, when an incident occurs with agencies that do not work together often, problems can arise. Such problems include confusion over what frequency should be used on-scene. Communication also becomes difficult between agencies that do not share a common radio frequency (VHF vs UHF) with other agencies on scene. The VCOMM channels provide a common base of frequencies that agencies can program into their radios in advance of an emergency.

The VCOMM system of 26 VHF and 22 UHF transmitters provides voice-only transmission. VHF (Very High Frequency) signals occupy the lower end of the radio frequency spectrum. The longer wavelength of VHF enables it to travel further than UHF. UHF (Ultra High Frequency) signals occupy the higher end of the radio frequency spectrum. While a UHF signal generally doesn’t travel as far as a VHF signal, it can more easily penetrate structures, making it a good choice for built-up areas or densely wooded or hilly areas.

A repeater function for the UHF signal is installed on most of the VCOMM transmitting sites. When an incident commander using a UHF radio enters the DTMF code, a repeater on the closest VCOMM transmitter is activated. The repeater enables the transmit and receive functions on the UCALL channel and also enhances the signal. The repeater function is not needed for VHF radios, but the DTMF code must be entered to fully engage the PSAP.

A Statewide Communication Interoperability Plan (SCIP) outlines the current and future direction for interoperable emergency communications within a state. Interoperable communication refers to the ability of emergency responders to communicate and share voice and data information. If our public safety agencies cannot communicate directly with one another by radio and data systems to coordinate life-saving activities, lives may be lost. VCOMM is a part of the SCIP for Vermont.